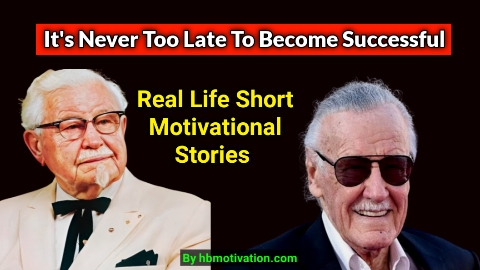 True short motivational stories – Success in life is harder to achieve than it might seem. There are occasions when things do not go as planned. While most people lack the patience to wait, we all know that success requires time. When we realize that achievement is out of our grasp, we consider quitting up.

The important thing to remember is that you only need a push to continue working toward your goal or achievement whenever you feel like giving up. You need a little bit of motivation for that. Motivation will show you that there is still hope—just take one more step.

To keep your level of motivation high, today I am going to share four true short inspirational stories of those people who became successful and famous in the late part of their lives. We only achieve success when we don’t give up on the things we are doing to improve our lives. But occasionally, things don’t turn out the way we want them to.

We occasionally receive everything ahead of schedule, but occasionally we must wait. But the issue is that we give up on the concept of our success because we don’t want to wait around for too long. We prevent ourselves from achieving our goals. We believe that everything we are doing is ineffective, that we are simply wasting our time.

Most of the people, When they don’t see any outcomes from their efforts, they give up on their journey, their goal, and their vision. They believe they are spending a lot of time without receiving anything in return.

If you’re working on something and it’s taking a long time for things to happen, keep working. Change your methods but not your ideas. Your hard work will never go in vain. Keep trusting in yourself. There are lots of people who have succeeded at an advanced age. They succeeded because they never gave up on their ideas, on their work, and on their passion.

The iconic comic book writer, Stan Lee, joined the industry when he was only 17 years old. Back then, he began working as an assistant in the comic book department for a company called Timely Publications. Stan Lee published his first comic book hit in 1961, when he was almost 39 years old. The man behind the creation of the iconic Marvel Universe was 43 when he started drawing the characters of the X-Men, Spider-Man, etc.

Nowadays, the Marvel cinematic universe is getting bigger and bigger day by day. We will never forget the great work of Stan Lee. Stan Lee started his career at the age of 17, but got his first book hit at the age of 39. In the meantime, if Stan Lee had given up on his dream, then today we would never be able to see some of the iconic Marvel characters like Spider Man. So the motivation is that things take time. You have to work and also have to believe in yourself.

One of Hollywood’s most respected stars, Morgan Freeman, loved acting since he was a child, but upon graduating from high school he chose to join the Air Force to become a fighter pilot. The actor eventually left the Air Force to establish himself as an actor, but it took him a while to do so. He was 50 years old when he landed his first big break in the movie Street Smart.

Colonel Sanders, whose full name is Colonel Harland David Sanders, He is the founder of KFC. Colonel Sanders’ life was full of struggles from the start. When he was 5 years old, his father died. Her mother used to work at a factory & Sanders was at the home to take care of his siblings. At the age of 7, he became an expert in cooking.

He was very fond of making and experimenting with chicken recipes. In his adulthood, he started a small roadside restaurant, where he sells fried chicken. His fried chicken became famous in the local market. After some time, due to the highway construction work, his well-established restaurant was also closed.

At the age of 65, one restaurant accepted his offer and started selling fried chicken by using his secret ingredients. In 1965, Colonel Sanders sold his recipe for 2 million dollars. After that, he started KFC, which is one of the leading food chains in the world. Colonel Sanders became a millionaire at the age of 65. His hard work finally paid off.

Boman Irani is a multi-talented Bollywood actor. There is no one else we can imagine playing Professor Asthana in Munna Bhai M.B.B.S. or Virus in 3 Idiots other than Boman Irani. The man who seems perfect in every role he plays on screen made his Bollywood debut at 44. Before his Bollywood debut, he worked at the Taj Palace hotel as a waiter and in-room service. He faced lots of failure in his early life and started late as an actor.

So if you ever think of giving up, just remember the inspirational life lesson of the mentioned stories. They will remind you that success takes time & it’s not as easy as it might look. But if you wait and give yourself some time, you will definitely become successful.

[Note- The information is based on internet research & it may be vary. This is only for motivation & Self help]